Last week, I introduced Dr Eric Berne’s concept of Transactional Analysis, and the three Ego States (parent, adult and child). I examined some of the language and behaviours attributed to each of these ego states, and have had some interesting feedback from readers of the article, including one individual who realised that she behaved like “a spoilt brat at Christmas” and used the term “I want..” when talking about presents.  Her husband said that he “always” got his wife everything on her list, even when it was expensive or difficult to obtain, “otherwise she sulked and made Christmas unbearable”.  Classic Child and Parent behaviour, which both parties recognised, both knew what to expect from the other and it seemed to work for their relationship (Complimentary Transaction).

I want to briefly explore the three ego states a bit further, and as you can see from the diagram below, the Parent ego state is divided into Critical or Controlling Parent and Nurturing Parent. 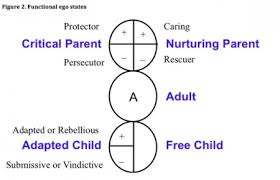 Can you think of occasions when you have been in one of these modes?  What behaviours did you display?  What language did you use?  Do you often find yourself saying “I sound just like my mum!”.  If you do, are you pleased or horrified? We internalise the words, voices, body language and rules from the parent figures from our childhood and use them again in adulthood.  Are you very critical and need to control situations and those around you?  Think back to someone in your past who may have displayed these same behaviours.  Why have you adopted them and in what situations?  How do others respond to you when you behave in this way, do they give in and agree with you (Complimentary transaction) or argue back so that you have to change your stance (Crossed transaction)?

The other aspect of the Parent ego state is the Nurturing part, and in the last article, I outlined how this came into play for me, when someone hit the back of my car, whilst I’d stopped at a red light.  After my initial shock and checking that there was no serious damage, I comforted the person who had hit me, as she was so apologetic and concerned for me (Complimentary transaction).  Part of my upbringing, was no matter what was happening to me, I had to always think about how others could be feeling and respond to them, i.e. even if you don’t like a Christmas present you’ve received you show some form of joy and gratitude, so as not to upset the other person.  You literally nurture their feelings.

The Child ego state can be divided into three sections: Rebellious Child, Adapted Child and Free or Natural Child, and these are self-explanatory.

Sometimes we rebelled and refused to say thank you for a Christmas present, or said it with bad grace so that it was obvious that we didn’t mean it.  Other times we may have been very dutiful and done as expected of us.  As adults now, how many of you are having a Christmas to please others rather than what you really want?  Are you happy cooking for everyone (Nurturing Parent), or would you have liked to be in a hotel somewhere putting your feet up, but are doing what others expect of you (Adaptive Child)?

The Natural child ego state is when we behave in ways which have nothing to do with external pressures or remembered ways of behaviour and we are just ourselves.  We are spontaneous and independent of any rules about how we should behave, and what we should say, and people just have to accept us for how we are, when we’re in this ego state.

As the diagram above shows there are positive and negative aspects to each of these ego states and you can read more about them in Berne’s book ‘The Games People Play’.

Transactions are a form of communication, I might ask “Is the meeting still at 9am?” to someone in the office, and they might respond “Yes it is”.  This is a straight forward communication and if we keep this going, it would form a transaction chain.  It’s as this chain develops that we begin to see whether our transactions are complementary or crossed, and will have to make a decision as to whether to change our response in order to get a different outcome to the conversation. 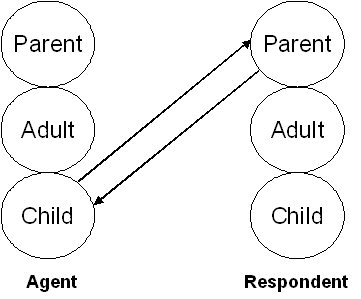 These are where the arrows in the diagram are parallel, and either means both parties are speaking from the same ego state as with the example above, where both were in Adult. Or where two people are happy with the status quo, such as in the husband and wife example at the beginning of this article.  The wife was in Natural Child and the husband was in indulgent Nurturing Parent mode and both were happy with each other’s standard responses, and so the lines stayed parallel.

As long as the lines of communication DO stay parallel, conversations and relationships run reasonably smoothly, even if it’s not on an Adult basis.  However, when individuals become confused about a situation, a task or a comment this is generally where crossed transactions occur.  For example if I ask you a question from my Adult ego state, such as “What’s the time please?” and expect an Adult reply, but instead receive “Have you lost your watch again!”, this shift will surprise me and I will try and move into a parallel or complimentary position, hence an answer from Controlling Parent could be  “You shouldn’t have moved it, then I would know where it is!”, or a move into Adaptive Child “I’m sorry, I left it by the sink upstairs”. 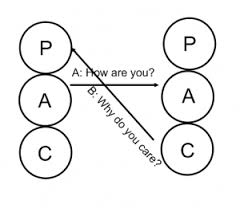 The crossed transactions often happen due to people giving emotional responses to questions or situations, rather than assessing the situation and responding from the Adult ego state.  Reflect on the people who you find difficult at work, or situations at home that always start an argument, and begin to adjust your response accordingly. It’s similar to using the broken record technique when someone wants to argue with you, but this time you are choosing your words carefully so as not to inflame the situation, but to clarify your position.  If I said to a member of staff “Have you finished that report yet?” depending on my tone of voice and body language it could be seen as a Controlling parent comment, rather than an Adult question. My colleague could become defensive and say “No, you only gave it to me yesterday” (Rebellious Child).  It would then be up to me, to bring the conversation back into alignment, by not responding in the same manner, but perhaps saying “I know I only gave you the report to do yesterday, and was wondering if you needed any more information from me in order to complete it?”.

Transactional Analysis is a fascinating look at human behaviour and this article has begun to examine some of the intricacies of the three ego states.  Once you understand what drives certain aspects of your behaviour, you are then able to examine your conversations and transactions with others and adapt your response accordingly.

In the next article, we’ll look at the games people play both consciously and subconsciously.  Can you recognise the behaviour of someone who is smiling and has a light voice, but whose actual message is undermining you?  Email me with your exaperiences and I’ll include them in my next article.