On the surface, this week’s blog appears to have little to do with our on-going topics of safeguarding and Transactional Analysis, but at the core does focus on safeguarding vulnerable adults and how the homeless are perceived by their appearance, body language and behaviour. It’s an article from the heart.

The root for this article started with an envelope that came through the door from Crisis at Christmas. Everyone has heard of Crisis and know it helps the homeless at Christmas time. A worthy cause and many people contribute, feel better and then get on with wrapping presents and preparing a feast for the big day. Why shouldn’t they, they’ve earned their break and presents and the right to be with those they love! This is all true, and I will be with my loved ones this year. However, I want to give you a snapshot of the humour, vulnerability and innate strength of the people I met, while working with Crisis in Clapham one Christmas. The people I’m referring to are the clients as well as the volunteers!

Firstly, when you donate your money or your goods, you do so to a highly organised set up. The volunteers ‘work’ and I mean work! I had to do a minimum of two days and they were long days. The venue was Clapham old cinema and Crisis only had a few short weeks to sort it out. It was cold, bare and drab and yet had to be made into a warm and inviting place for hundreds of people to meet, eat, relax, feel safe and sleep in. In my naivety I thought the places would be already set up with all that was needed there, and hadn’t realised that Crisis was constantly asking for donations of food, clothes, toiletries etc. The effectiveness of this huge machine is a key group of organisers that galvanise others into action.

The other thing I hadn’t realised was the range of people who volunteered, people 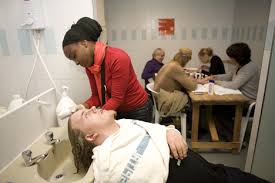 such as me who were general dogsbodies and did anything from taking people to get clothes, dishing out food and helping those with difficulty have a shower, through to healers, art therapists, hairdressers, doctors, advisors for getting a flat, financial  support,counselling and hairdressers. Every service in fact we take for granted in our daily lives, but aren’t easily accessible to the people we were catering for.  Services that help make a change in someone’s life.

By lunchtime on my first day, I realised that the greatest service I could offer these clients was communication.  The opportunity to chat about ordinary things and to laugh with them. The ones I spent time with wanted to get away from their daily lives, like we all do, and talk about mundane things rather than their worries, like with all do, and wanted to relax with friends where they felt warm and safe, again like we all do.

The first question a gentleman asked me with a wry smile was “what’s wrong with you?“. I was puzzled and told him nothing was wrong and why did he ask. He wanted to know my motivation for volunteering and replied “There must be something wrong otherwise why are you here at Christmas and not with your family?“. A very good question. He went on to describe his view of the volunteers after many years of using Crisis. He felt they were either “do-gooders” (that was me), “religious, or had no-one else in their lives and so were lonely”. The more I spoke to the other volunteers I realised how spot on he was. We didn’t want to think we fell into one of these categories, but in fact most of us did!

The more time I spent with the clients, the more I realised that any of us could be using this service at some point in our lives. I talked to one guy, who came in looking bewildered and said dismissively “I’m not like them!” When I asked what he meant, he said “Well look, I got new trainers for Christmas and a new jumper”, I asked him why he was at the centre and he said that his girlfriend had kicked him out and after wandering the streets, he had realised that “I had nowhere else to go“. The sadness was he was just like most people in the shelter. When you lose your home, your possessions go, your relationships deteriorate, your self-esteem gets a battering, and without an address its difficult to get a job.

Another lady came in heavily pregnant and I escorted her to a female only shelter, which only the driver knew the address of, due to their vulnerability. She described how she wanted to keep this child and so had left her long term partner and home, as he kept her addicted to drugs and each of her three previous children had been taken away from her and she couldn’t cope with the guilt anymore. You may have all sorts of feelings about this person, especially if you are a mother, but this woman was just like us, but had made bad choices at a young age that she had struggled to get away from for years. Leaving everything she knew and owned, and the one person she had loved on Christmas Eve and getting away whilst going cold turkey from drugs must have taken a huge amount of physical and emotional strength and courage. I have never been in a situation where I’ve ever had to made such momentous decisions and hope I never will. This woman was courageous in trying to turn her life and that of her unborn child around.

Other people came to the shelter to meet friends and as one guy said “to see who had died since last year“. This was their meeting place and yearly get together for old timers. Yet others had come to meet new people, and in fact I was asked on a date by one guy. When I asked him where he would take me, he said “I had no romance in my soul, as moonlit walks along the river were romantic” and when I jokingly asked about supper he responded with “most fish and chip takeaways still have tables you can sit at!”. He was a fun guy, had great wits and charm, but happened to be homeless.

I was shocked at the large percentage of homeless people who had a Forces background of some kind.  These people had experienced so much trauma from being in war zones that they found it difficult to relate to their friends, family and daily routine when they came back to the UK. This shocked me due to my preconceived and stereotyped view of who made up the numbers of homeless. A large percentage were articulate, had an educated background and a range of skills, but had suffered some form of stress, breakdown or illness that meant they had lost their home and family members couldn’t or wouldn’t cope with them. They didn’t want to burden loved ones and so ….left!

One guy told me he had in fact, been given a bed in a hostel, but he didn’t want it, as it was too confining being in a small room by himself, and he felt scared listening to other people screaming, ranting and crying just the other side of the wall from him. He had been on the streets so long that he slept on the floor next to the bed, rather than in it, because it felt too strange.

These people were not always polite, and were not always grateful, in the same way we’re not to waiters and shop assistants when we’re stressed.  The customers could be aggressive and have mood swings as they were not allowed to drink to take drugs in the shelter and at times the smell was overwhelming.  However, as volunteers, our job was to provide a service, which also made us feel a little bit better about ourselves and our lives, for whatever reason.  The clients understood that, and also knew that they would be back on the streets once the Christmas week was over, whilst we went home to our warm houses feeling satisfied. These clients humbled me, made me laugh and touched my heart because they were real. They weren’t  just statistics or drunken aggressive images as portrayed on the TV, but people who were telling me about their lives.  These people need our help whether it’s in a volunteering capacity, offering money or services or as part of a bigger society push. One day it could be you wanting company and food during what should be the most wonderful time of year?

Please support the Crisis appeal @crisis_uk, as £21.62 reserves a place for a 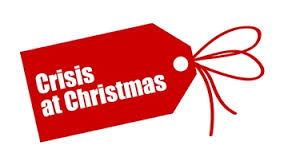