Did you hide signs of depression this Christmas? Personal Development

Did you hide signs of depression this Christmas? Personal Development

Are you coping with depression?

Did you cope with Christmas? Was it a case of gritting your teeth and just getting through it?  Did it leave you feeling numb, exhausted and depressed?  Could you be suffering from more than just the seasonal blues?

How many of you found it harder than normal, to cope during this festive season?  Were you struggling to hide the numbness that accompanied you each day?  Did you laugh and enter in polite conversation about presents and turkey, but actually didn’t engage emotionally with the person?  Did you smile and chat, but felt that you were doing so through a pane of glass that numbed the sound and seemed to delay your responses to people’s questions?  Did you feel you were observing the discussion rather than taking part?  All this going on and no-one noticed you were playing a part, rather than taking part! 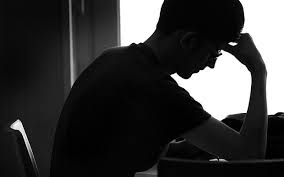 Depression is a known, and to some degree understood quantity. Doctors, therapists and psychiatrists diagnose it, chemists and health shops dispense anti-depressants and natural remedies for it; whilst celebrities endure it with the help of a therapist or new improved diet! Generally it’s seen as something to get through, and individuals reflect back on the feelings of sadness, anxiety and hopelessness, as a heavy black fog they have conquered.  Winston Churchill described his manic depression as a “black dog” that followed him around, and yet he coped, as you are doing.

The Royal College of Psychiatrists has produced a leaflet that outlines some of the symptoms of depression and what it can feel like.  It acknowledges that we all “feel fed up, miserable or sad at times”, but these feelings shouldn’t last more than “a week or two” and “don’t interfere too much with our lives”, whereas depression lasts longer and DOES impact on our lives.

Depression is described in Wikipedia as “a state of low mood and aversion to activity that can affect a person’s thoughts, behaviour, feelings and sense of well-being”.  The majority of us can identify with suffering  some of these feelings at low points in our lives, such as divorce or losing a job, and actually it’s normal to feel these emotions if something awful has happened in our lives.

We’ve all read or heard something about severe depression, but what about those people who live with a less severe form?  Is this you?  Have you gone through events that you haven’t recovered from and intuitively know that you are suffering from depression and the reason behind it, but don’t know how to move on?  Are you someone that ‘s worried that if you talk to the doctor, it will appear on your medical records?  Do you not want to “come out” as having a “mental illness” to your family, friends and colleagues, as despite the adverts to the contrary, you feel there is still a stigma attached to this label?

How can YOU move forward?

I’d like to think I can help you explore your own situation further.   There is a theory around how people manage change, that may help you understand your emotional responses to events better.  It’s called Fisher’s Transition Curve, 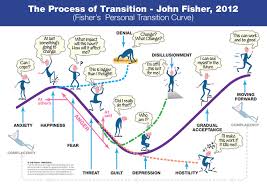 and it describes seven stages to managing change successfully.

When change happens, people tend to go through a range of emotions including numbness, shock, anger outward, anger inward and depression before they are able to take stock and set new goals.  At the bottom of the curve is depression, the feeling of hopelessness and inability to move forward.   You are at the lowest point!  You have already been through a range of other emotions to reach the depression stage, and you can now use a range of methods to help you move out of this state, and set new goals to move upwards on the curve.  One method might involve medication, another might use communication or  ‘talking’ therapy in which family, friends or counsellors can help you begin to make connections between your feelings or thoughts and potential actions you could take.

One form of therapy is Cognitive Behaviour Therapy (CBT) and it’s based on the belief that when negative thought patterns are identified, positive changes in feelings and behaviour can take place.  It is often used to support people suffering from stress, anxiety and depression. The NHS Choices link above describes CBT as a way “that can help you manage your problems by changing the way you think and behave”.  It doesn’t remove the problem, but helps you manage it, by breaking it down into smaller manageable pieces.  It is very NOW focused and doesn’t delve into past issues, but concentrates on current concerns.

Christmas is an uncertain and lonely time of year for many people.  I hope this article shows you are not alone, and that there are options for you to consider and research,as well as people you can take into your confidence.  I specialise in coaching and problem solving and am available to discuss the range of options open to you, in a FREE CONSULTATION  via our website email address.  I will also be a certified CBT therapist in 2015 taking on personal clients.